About 2 weeks ago, I found out on Facebook that a guy I knew had committed suicide.  I was heartbroken!  This was a guy at the top of his game, one of the best people I know who was great at his job but alas fell on bad times.  I can't honestly say I knew much about what he was going through but when I bumped into him at Shoprite a few years ago he told me his wife left him because business wasn't booming.  According to him, she was following her friends' advice but well what could he do? Things will turn around he said... and he went his merry way.  He seemed like such a happy go lucky guy so imagine my shock when I found out he just could not take it anymore.

Then my mind went to some random message I got in my Whatsapp inbox close to the end of last year. 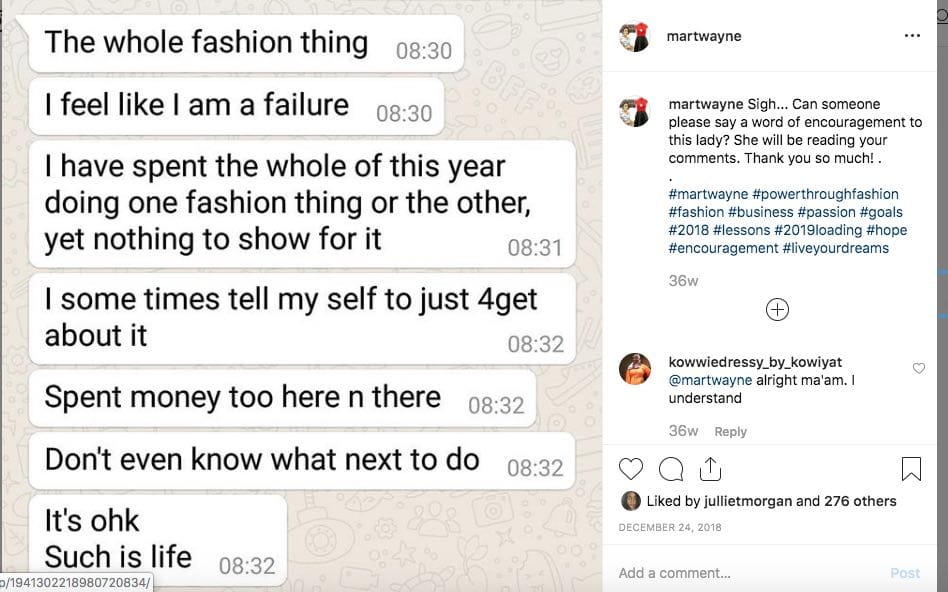 I was at a loss for words to be honest.  I was also going through a tough time that I had no words for her. I just ask to ask my Instagram audience to say a word of encouragement for the lady and she read through every comment.  So I decided to compile the comments into an e-book, hoping to encourage someone out there who may be going through a tough time.  Hope it helps you as much as it helped me and this lady.

“Kindness is the language which the deaf can hear and the blind can see.”

Many people go through issues on a daily basis and with the tough economy, it is really easy to reach that breaking point.

I remember just yesterday I read a lady's story in a Group. She had bought the ropes and tied the noose.  A conversation between 2 people walking past her window stopped her. She overheard one of the guys say "trust God nah" and that really struck.  She moved to a new city and within a day she got a job.  She ended the post by asking how she would have missed the good life she had now if she had ended it all then.

It is tough to continue when all you want to do is cry yourself to sleep or give up but please give it one more or two more or three more tries. and even if you fail, never give up. We've all gone through tough situations and somehow we managed to keep on keeping on.

"I just can't give up now. I've come too far from where I started from.
Nobody told me the road would be easy
And I don't believe He's brought me this far to leave me".

“Success consists of going from failure to failure without loss of enthusiasm.”

Interestingly enough, I have a friend who has this event in Lagos called "Fuck Up Nights" (excuse my language) but that really is what it is called.  She invites business leaders to come and talk about their failures.  so see... everyone has gone through it.  Not just you!

We all go through it. Times when we feel inadequate.  Times when we feel our effort is not good enough. Times when you know you are good but your bank account tells you otherwise. Never be swayed when you see people who seem to be doing better than you on social media. it is all packaging! When you feel so unsure of yourself, just reach out to someone to talk.  It is better than keeping it all in.  We all have 1 life to live.  There is always a way out!

So what do you do when you feel like a failure?

Suicide is real and with social media, many of us are becoming more aware of this problem.  Please please please if at any time you feel stuck, depressed and alone, please reach out to someone, even if it is a stranger.  Whatever it is you're going through is not as bad as you think.  A million people are also going through it.

In the meantime, you can download this book.  Trust me the comments really really helped, not just her but me as well.

By clicking the download button and confirming your email, you are also added to our mailing list and will receive marketing material from us from time to time.  Don't worry, we won't spam you. If you feel overwhelmed, you may unsubscribe at any time.

A fashion entrepreneur passionate about helping people turn their passion to profit.  Check out the home page for more of our business tools, online and offline fashion courses and PDF books.

Someone you know needs this article.

If this helped you, help them out by sharing this article on social media.

Life's a breeze with #Built2Bill. Now you can ditc

Many lives were sacrificed, many battles were foug

Why deal with the headache of manually calculating

Would you like to launch your clothing line but ha